Making the most of a long layover

Sometimes a 12-hour layover can be an opportunity for a landscape architect -especially when stranded at Chicago O’Hare in the summer.
Arriving into Chicago at 6.50 with a connection to Europe departing at 18.50 was a perfect opportunity to visit a few urban gems of North American public space.

A quick ride on the blue line from O’Hare to Monroe was like riding an urban development timeline as the sprawling suburbs and freeways surrounding O’Hare gradually dissolved into quaint neighborhoods of 3-5 story masonry buildings with the occasional contemporary infill, before descending underground and into the subway darkness until eventually arriving at the Monroe stop.  Exiting the subway at Monroe for the first time was like passing through a portal and into a new world.   The morning sunrise across lake Michigan was being reflected into the intersection of Monroe and Dearborn, creating a calm, ethereal glow in a canyon of skyscrapers as the city was quickly awakening.  After catching up with a good friend for coffee and getting some general indications, it was time to head out on foot to visit as much as possible. 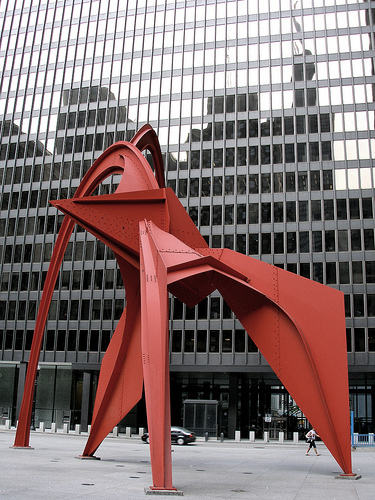 “God is in the Details” sums up this spectacular public space.  Ludwig Mies van der Rohe was commissioned in 1974 to design this masterpiece of Mid-Century Modernism where every detail is thought out in a strict minimalism, which, in turn, forms an extremely powerful setting for Alexander Calder’s sculpture ‘Flamingo’.  Visiting this space in the morning while the sun was still low on the horizon was particularly appealing and it would have been nice to spend more time (with a proper camera and sketchbook) to take it in. 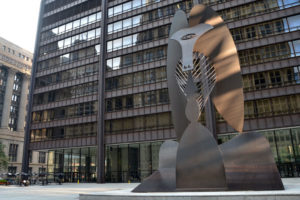 Walking a few blocks North on Dearborn, A giant untitled Picasso sculpture and intimate farmers market greets you in the plaza of the Richard J. Daley center. Another jewel of the International Style, the building was designed by Jacques Brownson of the firm C.F. Murphy and completed in 1965. 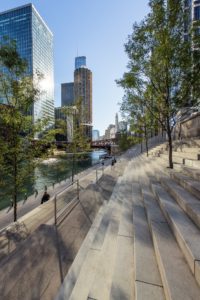 Continuing north on Dearborn, you pass under one of Chicago’s elevated trains and eventually meet the Chicago River.  The river itself has an incredible history (especially for you civil engineers), but a current river walk expansion project by Sasaki and Ross Barney architects has created a series of public spaces that the New York Times labeled “One of the most viscerally satisfying new projects of the season”…and we agree.  The thoughtfulness in detailing, space programming, horticulture, interpretive signage, and public access is an exemplary example of how to turn and underutilized riverfront into dynamic public green space. 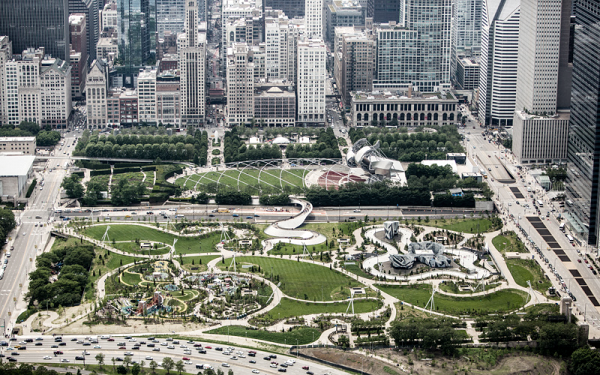 Following the river walk out to the coastline of Lake Michigan then heading south, you eventually make it to a pedestrian access into the recently completed Maggie Daley Park. While the park is fairly new, and the plant material needs time to grow in, it is easy to see how popular this new and expansive green space has already become for residents and tourists.  The children’s garden was buzzing with activity as kids of all ages rambled through colorful (and aesthetically tasteful) tunnels, over bridges, towers, and interactive water features.  An open lawn was being used as an impromptu training field for a youth flag football practice and the numerous tennis courts were filled.  Especially thoughtful is the placement of picnic tables and seating under shade trees throughout the park and the use of landform to create intimate spaces within the park, or elevated areas to take in the vista.  Unfortunately the climbing wall structure was not open, but even when not in use, serves as an interesting and contemporary urban “folly” of sorts. 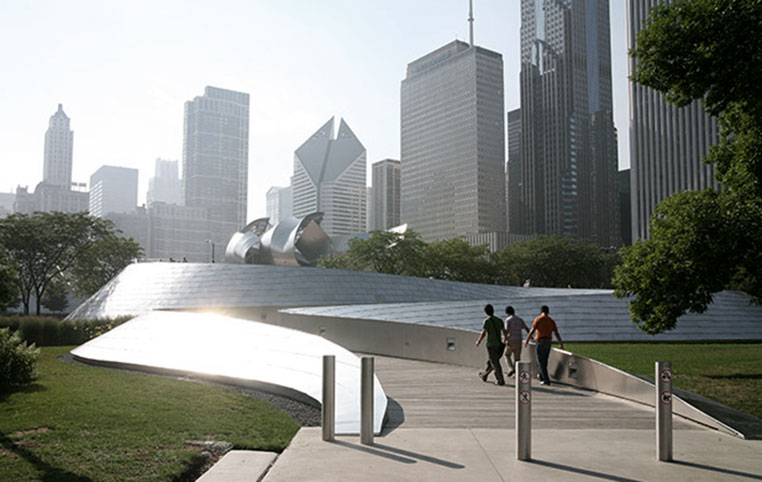 Walking West back towards the city center, the Frank Gary designed pedestrian bridge is an elegant, curvilinear connection to the now renowned Millennium Park. Especially pleasing is how well the bridge ramping walkway is graded so that you barely notice the ascent and decent, while the curving form creates such a variety of views that a more traditional straight-shot bridge could never provide. 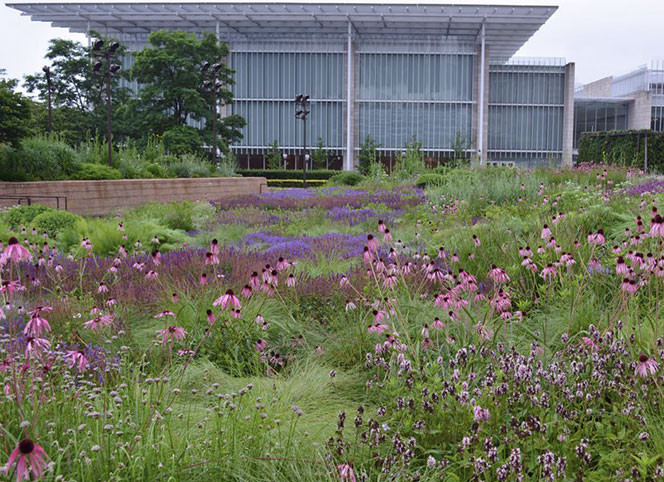 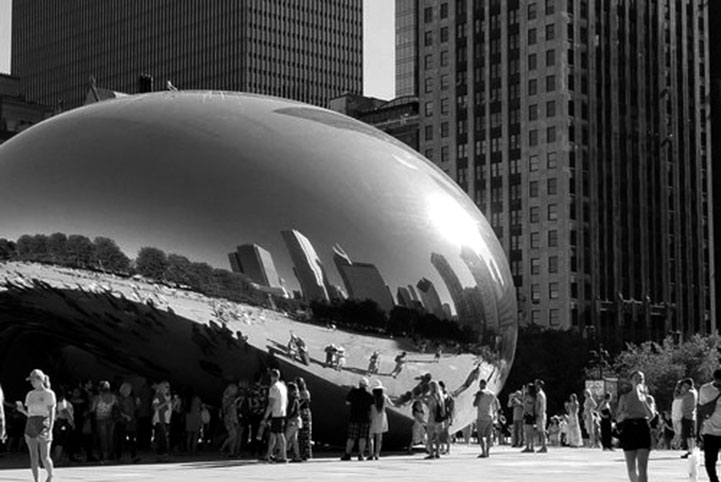 Originally opened in 2004, I had been looking for an opportunity to finally walk through one of the most important civic U.S. projects in recent history and it definitely did not disappoint. Walking through the Laurie Garden’s spectacular perennial gardens and goofing around (with all the other tourists) below the Anish Kapoor – designed ‘Cloud Gate’ were definitely highlights of this layover.

On your next long layover at Chicago O’Hare, we highly recommend taking a trip to the city center and exploring the many fine examples of public open space… Doing so in the wintertime may be a tad difficult however.  Chicago is, after all, “The Windy City” where it is common to encounter blizzards and winter temperatures of -10 degrees Celsius